Feast or Famine: The Vicious Cycle Behind Eating Problems

A Method in the Madness

The symptoms associated with eating and weight problems follow definite patterns. These sometimes confusing symptoms make a lot more sense when you look at them in relationship to one another. And recognizing these relationships can speed your (and your child’s) progress toward normal eating. In fact, I’ve found that understanding these patterns is crucial for anyone who is trapped in an eating disturbance and wants to be free.

The term “eating disorder” usually conjures up visions of emaciated girls working out at the local health club, their frail, overworked, skeletal frames sending shivers of aversion through most people who notice them. But people with disturbed eating patterns come in all shapes and sizes and ages. In fact, many are overweight. Few realize that they (or their kids) suffer from definite eating disturbances because most people learn to accept their abnormal eating patterns as normal for them—symptoms of their defective appetites, bodies and psyches.

Regardless of body size and peculiar type of eating struggle, the underlying root of all eating disturbances, with rare exception, is the same—under-eating. (Under-eating includes delaying eating, eating too little food, eating long after hunger signals are felt, missing meals, eating poor quality food, and ignoring hunger.) There is one fundamental pattern of eating disturbance that flows from this common cause. This pattern is a cycle that applies to any kind of eating disturbance including a tendency to overeat, compulsive overeating, carbohydrate and sweets cravings and “addictions”, “food addiction” in general, and bulimia which does not involve purging.

I call the cycle associated with eating disorders and weight control problems the Feast or Famine Cycle. This Cycle, or some variation of it, illustrates the universal pattern experienced by people with eating problems and pathological relationships with food. It also applies to dieters and informal under-eaters, regardless of the degree of their eating disturbance. Whether symptoms are mild or severe, the patterns are the same. 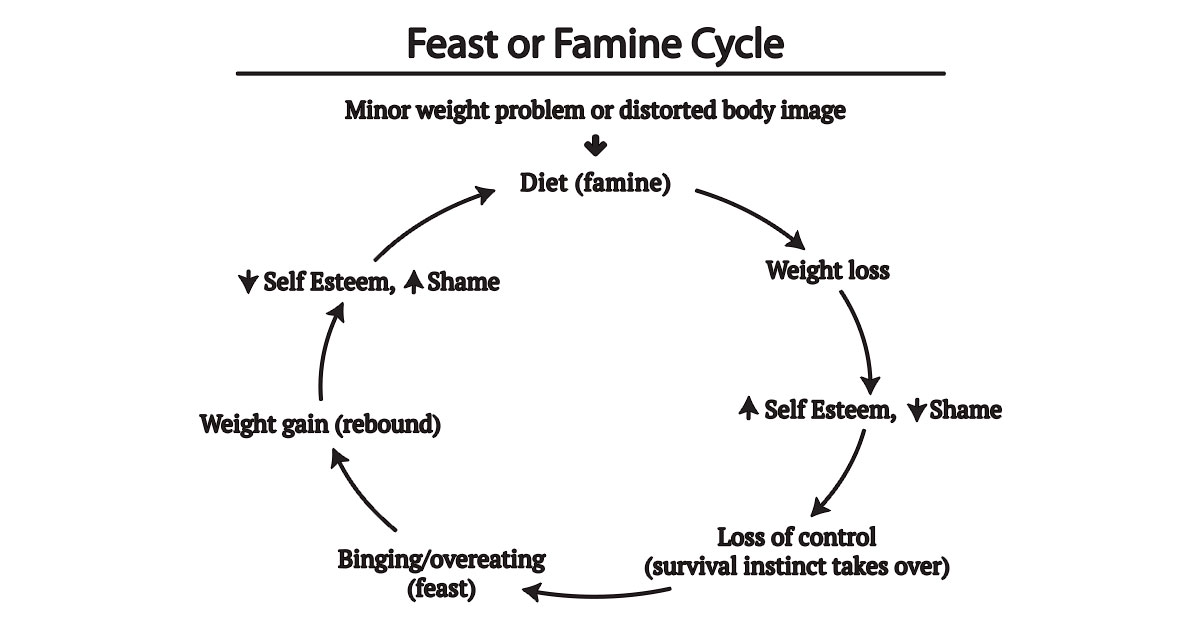 A Case Study of the Feast or Famine Cycle

Marilyn was a chubby kid and her mom was a very chubby adult. A twenty-year veteran dieter, Marilyn’s mom was so fearful of her daughter’s becoming fatter and fatter as she grew up that she took her to a diet doctor when Marilyn was only nine. This doctor prescribed diet pills (amphetamines) to help little Marilyn lose weight.

Over the summer Marilyn lost twenty-five pounds on her first famine. This was a bit more than she “needed” to lose, and a serious weight loss for a child with such a small frame. Her body was transformed and her mother was elated. But when Marilyn went back to school in the fall, she had to stop taking the diet pills. The doctor said they were only a temporary help because they were addictive.

Marilyn started gaining weight within two weeks as she shifted to the feasting side of the Cycle, and by the end of the school year she had gained thirty-five pounds. Marilyn’s mom begged the diet doctor to give her daughter more diet pills to reverse the trend, but he said he couldn’t. He told her that Marilyn was gaining weight because she wasn’t sticking with the low-calorie diet he suggested. That was true, but it wasn’t the whole story. Marilyn’s eating was out of control because she was on the Feast or Famine Cycle.

Marilyn continued to diet off and on throughout grade school—famines followed by feasts. Her mother took her to Weight Watchers with her every week for about a year. Marilyn learned to weigh her food and measure her portions. “Weighing in” at meetings was always nerve wracking. Sometimes she did lose weight, but when she gained she was mortified. She never reached her “goal” with Weight Watchers, even though she put enormous effort and time into her diet. She knew she was cheating at times, but she got so terribly hungry. Her lack of control left Marilyn feeling like a complete failure. Her weight gradually went up because the weight she had lost, and usually a bit more, always reappeared. Once, Marilyn overheard a lifetime member (a member who reached her goal weight at one time) “whisper” to her friend as she pointed at Marilyn, “If I had been that fat as a kid, I’d have locked myself in a closet and swallowed the key.” After that Marilyn refused to go.

But Marilyn’s mother didn’t give up. She took her discouraged daughter to her new church diet group a few months later. Motivated by the encouragement of the group members and afraid to fail again, Marilyn lost thirty pounds over the next five months. She was terrified of having her weight gain announced to the whole group—a fear that kept her from eating anything not on her diet, for a while anyway. When she knew the weight was coming back, her group attendance ended. By the time Marilyn leveled off again, she’d gained back forty-five pounds.

Between formal diet programs Marilyn often skipped lunches because she was too embarrassed to eat in front of her classmates. She exercised, too, instead of eating breakfast, and she tried other diet tactics, such as eating only fruit on weekends or cutting out whole food groups, like starches. And of course, she overate (feasted) between her diet efforts (famines). By the tenth grade, Marilyn was 100 pounds overweight.

This sad story is a rather dramatic true example of how the Feast or Famine Cycle leads to weight gain over time. Remember, it is the famine or under-eating part of the cycle that gets it going and keeps it going. Technically, the Feast or Famine Cycle has been misnamed. It should be called the Famine or Feast Cycle because the famine is the trigger for the problem eating patterns that follow, including the feasting. The famines come first. This is an important fact because we have been taught the exact opposite for decades. We have learned that overeating or feasting is the main problem in eating and weight struggles. So we have spent fifty years trying to fix the feasting, trying to get people to eat less, to control their eating, to stop overeating. But we haven’t been very successful because feasts don’t usually happen all by themselves; they’re triggered by the famines. The famines come first and it’s the famines that must be fixed to stop the Cycle. The feasts, I have found, stop quietly as a result.